Blog
<Back to Blog
The 12 Most Popular Fictional Mad Professors
October 21, 2016 - Posted to Writing 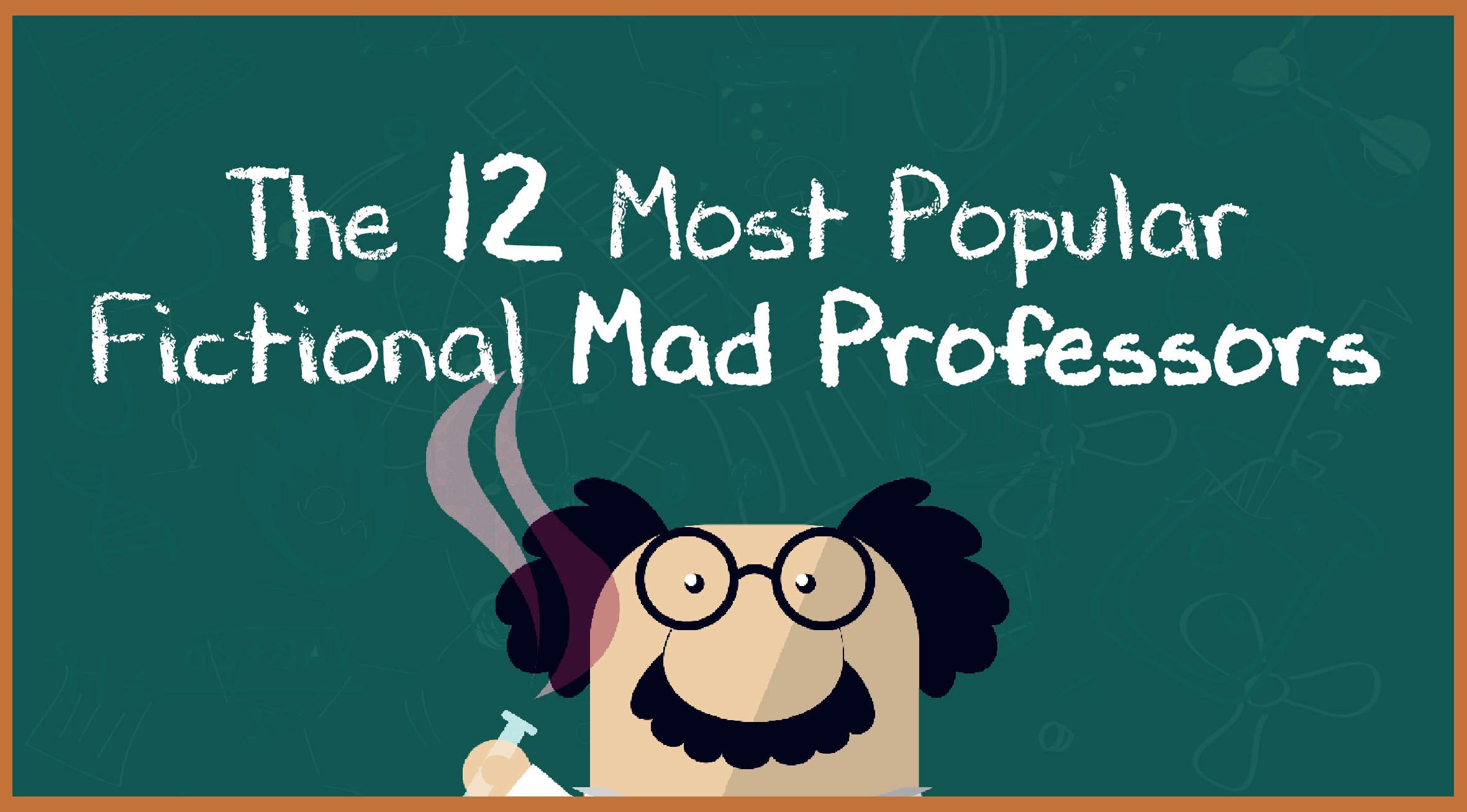 Although science is good for opening our minds to the wonderful world around us, is surely beneficial for finding cures for disease, and who can disagree with what it does for giving us ongoing information about our ecological systems that are in such sore need for restoration. However, there are some scientists that have been created in the minds of extraordinary novelist and film makers that make you want to pause and go, hmmm is that even possible?

We have sat in movie theaters horrified at the idea that Dr. Frankenstein could build a monster from the parts of the dead; glanced in the dark corners of our homes while watching re-runs of “The Island of Dr. Moreau”, but here is a list of some of the most profound fictional mad professors that we found and we hope you are ready to be mystified, horrified, and maybe a little baffled at how writers come up with these creepy, but compelling characters.

Although he made Marty McFly’s life tops-turvey by sending him back in time, Dr. Brown was one of the zaniest, funniest mad scientist on our list. He may not be the kind of Professor you want helping with your term paper, but if you needed to work on the space-time continuum he would definitely be your guy.

Krank (The City of Lost Children)

Michael Jackson may have missed his childhood but he was no child dream stealer. Krank is on the list as big time weird. He is the mad scientist that doesn’t even have a method for his freaky madness. Sucking children dry after he captures them with the help of his minions, and stealing their dreams, is enough to make you want to hack off his rat-face.

All he wanted was a love of his own. Coming all the way from Transsexual Transylvania, Frank wanted to build him his own beef-cake lover, and he thought he had all the parts right, even up to attaching the head of a biker named “Eddie”. But the heart wants what it wants, and all Eddie wanted was a female once he was alive. Tim Curry will always be remembered for the part he played in bringing us the heartwarming Frank ‘N’ Furter, but still, body parts? Yuck!

There seems to be a love of dead parts and dead people among many of the most insane of those that made the list, and Dr. Herbert West is no exception. His formula for bring back the dead gets worse with each activation, and his friends are getting a little worried about their shy and closed mouth friend, who is now losing his mind. Losing? From the time he began talking about bringing back the dead they should have realized his ass was lost.

Although he didn’t have the weird hair, or play around in graveyards, this ex-Nazi advisor made the list because he teaches a lesson, to always stay motivated. His answer to impending destruction of Russia when a U.S. bomber is on its way fully loaded with a nuke, is to gather lots of pretty girls and the biggest minds in the nation into a bunker to survive the dilemma. Big fun, big laughs, this movie is an oldie but goodie!

You could almost hear the cheers across America when mild mannered chemist Walter White would stick it to DEA agents and big bad drug dealers as he mixed his chemicals to create the meth he used to fund treatment of cancer and to provide for his family.

We all want knowledge, but some of us reach for it beyond what is beneficial for our own sanity. In Christopher Marlowe’s play, The Tragic History of the Life and Death of Dr. Faustus, the quest for this knowledge comes with a great price, Dr. Faustus must turn over his eternal soul. You see, Dr. Faustus was not satisfied with the usual scientific disciplines, no, he had to have what was unattainable, and for this he needed a demi-god. Get the play, read it, you will not be disappointed.

It’s true that money cannot buy happiness, but in the case of Emeric Belasco, the crazy character created by Richard Matheson in the book Hell House, it should have at least been able to get him some therapy. After his father left him millions of dollars, he buys a mansion and begins inviting house guest to use it as his own personal torture factory. Dig this. He wants to see how lowly humans can get by subjecting them to cruel and bizarre experiments.

One of our favorite love-to-hate mad scientist. We remember how it was not his fault that the big green fella became what he is today. He started his journey being a hero, and has since jumped into the hearts of kids big and small as the Incredible Hulk. Seeking forever to find a cure to keep him from shredding his clothes, property and others to pieces, we cheer him on in every twist and turn of every Marvel comic book and movie. We love you, big guy.

H. G. Wells gave us the unforgettable Dr. Jack Griffin, best known as The Invisible Man. Of all the mad scientists within the gamut of them throughout literature, movies and television, he is by far one of the most envied. Everyone always talks about what they could do with invisible powers after seeing or reading about his journey into the mirrorless world. But stay out of the rain.

DC comic heroes would have a party if they could just get rid of nemesis, Lex Luthor. Another billionaire with crazy intentions on ruling the world and feeling that if he could just get rid of DC comic heroes like Superman and Batman, his life would be just perfect. We think that Lois Lane would also like a vacation from Lex. One day she may be tossed out of a window and nobody will be there to catch her.

Try our service with 15% Discount for your first order!